Eric Parmelee: from dishwasher to Chef-de-cuisine: A Swan Song. 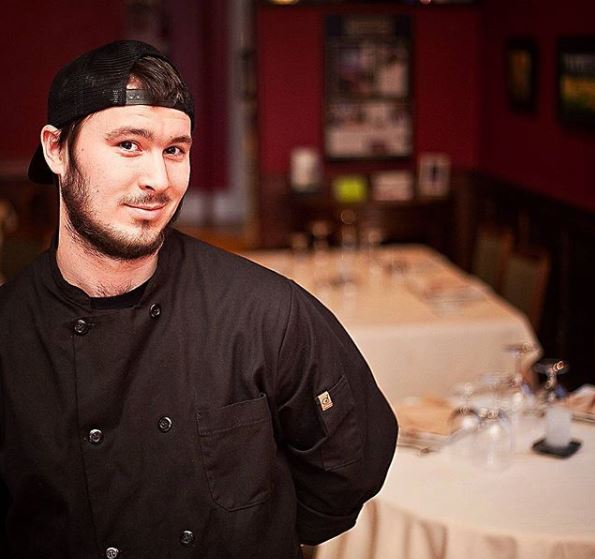 Eric Parmelee is the Chef-de-cuisine at Pangaea. He has a passion for creating delicious and unique specials and we have watched him thrive and rise over the years in the kitchen and now we watch him fly out on his own to follow his dreams.

Pangaea: Tell us who you are and where you’re from.

P: What brought you to Bennington? And what made you decide to stay?

EP: College (Southern Vermont College) brought me to Bennington. I never went home because I fell in love with the area and wanted to start a new life outside of Connecticut.

P: Tell us how you got your start at Pangaea.

EP: When I first started at Pangaea, I was a bus boy. For a few months I worked here and there until one day Nick Disorda approached me about working in the kitchen as a dishwasher. Without hesitation I said yes. As I started my new path in the kitchen, I watched everyone around me cook and day by day I started to learn more. After a year I was learning Garde Manager (traditional kitchen position that prepares cold items) while being a dishwasher part time. I spent a year doing both positions. At the end of that year I graduated college and was asked if I would take on a grill cook position. I worked on the grill for eight months before some changes were made in the kitchen where I was then approached for the sauté/sous chef position. I didn’t think I was ready but with a few nudges from co-workers I took the position. I worked as the sous chef for two and a half years. Now most recently I have been working as the Chef-de-Cuisine.

P: When did you realize your love of cooking?

EP: From a young age I loved cooking. My mom was always in the kitchen baking all sorts of desserts and I would help. When I was around seven years old I received my first cookbook. It was Emeril Lagasse’s kids’ cookbook called “There’s a Chef in my Soup!” As I grew up, cooking just became more interesting and fun to me.

P: What is your absolute favorite thing to make?

EP: My favorite thing to make is tacos. They are just so versatile, you can put pretty much anything in a taco.

P: What is the craziest taco you’ve ever made?

EP: The craziest taco I have ever made had to be a breakfast taco. It’s nothing crazy but I don’t see breakfast in a taco so I guess that’s the craziest. It was scrambled eggs, with jalapenos, onions, red peppers, cheese, spinach, tomato, mushrooms and salsa.

P: What is one of your least favorite things to make but favorite to eat?

EP: Dessert. Everything in desserts has to be exact and there is usually a lot of ingredients involved that are necessary, but they taste so good.

P: If you could only eat one dessert for the rest of your life, what would it be?

P: What do you see in your future?

EP: In my future, the plan/idea is to open my own restaurant down in Tennessee.

P: What draws you to Tennessee?

EP: Tennessee is a beautiful place, there is a lot of similarities between there and Vermont. Throughout most of my life I have always just wanted to end up down in that area.

P: If you were to recommend one restaurant in Bennington outside of Pangaea or The Lounge, which would it be?

EP: I would recommend Allegro, in downtown Bennington. It’s one of my favorite places to go sit down and have a meal. The atmosphere is very relaxing and I am always happy with everything at the end of the night.

P: What is your favorite dish, special or menu item, that you ever created from Pangaea?

EP: I have few dishes that are favorites of mine. The most recent one would probably be the duck with blueberry compote and herb risotto. The other ones would be the sauteed calamari, because its different style and technique compared to the normal fried calamari most people eat; but it tastes just as good. My top menu item would be Ravioli. This is on top because there is no better feeling in the kitchen than rolling out pasta by hand. Making pasta and especially Ravioli is just so peaceful to me and there is so much flavor that can be added into one bite. 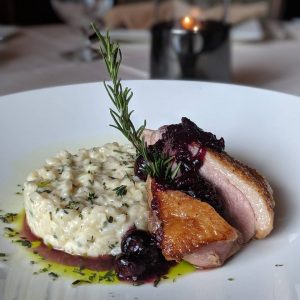 P: If there is one kernel of knowledge you would take with you from you experience at Pangaea, what would it be?

EP: It would probably be to “embrace change and be open minded.” or “Keep your mind where your feet are.”

P: What can we expect from “Chef Eric Parmelee” in Tennessee?

EP: Well the dream has always been to open my own restaurant. So right now, the plan is to just develop further as a chef and gain as much experience as possible before my dream becomes reality.

After October, chef Eric is moving to Tennessee with his fiancee and their rescue dog Sammy. So come try his spectacular menu while you can!